Can I still run an M1 store?

Good morning everyone and welcome back to another edition of

As many of you will know all official support for Magento 1 came to an end earlier this year (2020). This means that Adobe will no longer be devoting any resources whatsoever to the M1 platform going forward. In their minds, there's no more Magento 1 and Magento 2, there's just Magento.
And while we here at Hussey Coding fully support migration to M2, today we ask the question ... 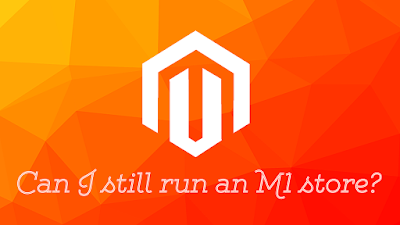 If you've been using Magento since the start, then your store is quickly coming up on it's 12th, even 13th birthday. By now, you'll have become overly familiar with the way M1 works, what it can do for you, you'll have found and implemented all your favourite extensions and you probably have your trusted devs on speed dial, ready to help with new features or problematic issues. With all of that taken into account, I think it's perfectly understandable to want to stay with M1. But can you still successfully run your business using it?

Of course, the short answer to the question is yes, you can still run your store using M1. In all honesty, you can probably go for a while without any issues at all. However, that won't last forever! Below we're going to outline some of our concerns for the stores that stay on M1.

This is the big one because it not only affects your store but every part of your business, even the parts arent online! Let's be clear, you, as a store owner, have always been responsible for the security of your store, however, that mostly revolved around your ability to make sure the latest security patch was installed, that is no longer an option as there are no more security patches and so now you have more responsibility in regards to store security.

Adobe has made it quite clear that it will not be responding to any M1 security issues, meaning that you are very much on your own now and a prime target for Cybercriminals, the reality is that the further away from June 2020 we get, the easier it will be for Cybercriminals to detect, infiltrate and exploit the gaps in your M1's store security.

If you want to keep any M1 extensions, then you will have needed to download them by the 7th of July 2020. Adobe actively removed all M1 extensions from the Magento Marketplace after this date.

In addition to this, after the 6th of August 2020, they were all removed from the Magento repository. If you need a new M1 extension now, then you'll need to find someone to custom-build you one. And don't forget that you are responsible for ensuring that all extensions installed now meet your security standards and don't compromise your store.

Traditionally as a store owner, you are, or at least should be, quite careful about who you use as a third party vendor. Picking the wrong vendors can lead to difficulties, loss of reputation and even security risks. With the M1 platform's code becoming more and more diluted and varied from one merchant to the next as adjustments and custom-built extensions are added this may become an issue for third party vendors. Suppliers, contractors, payment gateways and other third-party services will probably stick around for a while, but as time goes on, we predict that more and more third-party vendors will start refusing to work with merchants using the outdated M1 platform. Why? Well simply because the further away we get from M1's EOL the more of a risk the platform becomes to the vendor's businesses, reputation and security.

In the short term, nothing will cost you any more than usual, until there is a problem or your favourite extension stops working.

The reality is, even if you have an internal developer or dev team, they're not going to want to be working with old code and methods forever. They're going to be learning new languages, methods and coding practices because that's where the money is! And the further we get from June 2020, the more specialised an area M1 code becomes so inevitably cost will go up as fewer and fewer developers want to work with the older M1 system.

Not only that but a year from now when you want to revamp your site or store then you'll need to find someone to custom-build it for you, incurring more cost again. Security and maintenance will cost you extra and, as we will see in a moment as your expenses are going up, your income will most likely go down.

You'll need to take into account how crowded your market is and how competitive you want to be. If you are a small, bespoke store that doesn't see much competition, then this may not be a problem for you, however, for many of us in the retail space, 2020 has been a brutal year!

Much of it has just been about surviving and staying open as opposed to focusing on being top of the Google search list. Though being competitive is the last thing on your mind, you need to factor competition into your plans for the future. When we start to see some semblance of normal again, you may find that your industry space has been filling up.

Even as new technologies become available, it will grow increasingly difficult to integrate them into your business. Costing you extra to get them up and running, all while your competitors, both old and new, gain the edge by leveraging new innovations and processes.

Like we said above, there will be support out there, for now! Vendors won't drop you tomorrow, and your customers won't abandon your store overnight. However, the longer we go on, the smaller and smaller that pool of support will become. M1 developers will be in short supply, and even generic M1 stores will become unrecognisable as stores will require unique code and systems to keep them running. Until eventually, the M1 store you started with isn't an M1 any more.

So what's the conclusion? Can you still run an M1 store now that EOL has come and gone? Yes but not for long, eventually you are going to have to move or migrate. M2, in our opinion, is your best option and though it will cost you a lot upfront, migration will save you more down the line.

If you're looking to migrate to M2 or you're looking for continuing support for your existing M1 store, then head over to Developerconnection.co.uk now! There you'll find developers and developer teams who are skilled in every area of Magento, ready and eager to help you out.

Thank you for joining us today. We hope you found this article helpful and would really appreciate your further support by liking and sharing this across your favourite social media platforms.
Until then, stay safe and have a great day.