Hey everyone and welcome back to another edition of

It's been almost a week now since this year's Meet Magento UK and what a day it was!

30+ speakers, 4 MC's and even a comedic impressionist, it doesn't get much better than that! So join us we take a look back at MMUK'20 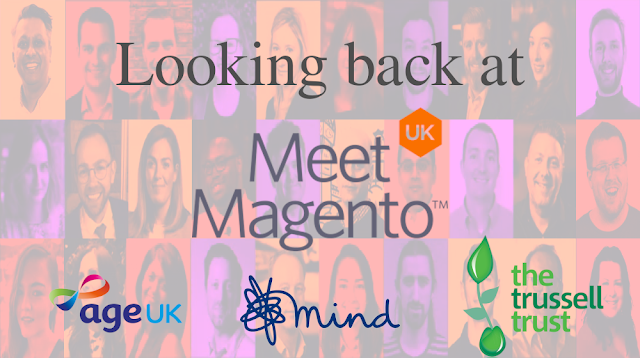 First thing that needs to be said, if you missed it then you have truly missed out, though this was an online event and the buzz of seeing, interacting and soaking up the atmosphere of the Magento community couldn't be enjoyed in all it's glory, the chat bars were flowing nicely with questions, encouragements and all the usual awesomeness that comes from this unique community.

This same community, through sponsorship and ticket sales, managed to raise over £84,000 for charities that are working harder than ever in this time of global and national crisis to care for the most vulnerable.

The line up of speakers was incredible and though we have not had a chance to catch up on all of the sessions, what we have seen lived up to the hype! Whatever your passion in eCommerce, whatever your skill, knowledge, problem or interest MMUK'20 had something for everyone. If you are a ticket holder then you can still (at the time of writing) head on over to the event page now to catch up or re-watch any of the session recordings.

Earlier this year we covered the Adobe Summit which, understandably, also went online due to the pandemic. In our opinion, MMUK'20 was a better event. Granted that the Adobe Summit had less time to get ready to make the move online however it's Adobe, they have the resources.

Don't misunderstand, we aren't saying that the Summit was bad we're just saying that MMUK'20 was better. How I hear you ask, well mostly because MMUK felt like an event, we needed to be online at 9.30am to watch the opening keynotes, we had to pick what sessions we wanted to see live, we could interact with speakers, MC's, sponsors and other patrons and sure we can go back now and watch the recordings but there was this energy about it, going downstairs to make a cup of tea became exciting because there were only 5 mins until the next session began.

So what happens now? Well first off you should have all received a feedback form in your inbox, it takes a few minutes to fill out and I know the team over at JH would appreciate your honest feedback about the event as it only serves to make next year all the better. Also, head on over to your favourite social media platforms and show some love for the event, talk about your stand out sessions, discuss, deliberate and keep the conversation going.

Thank you to everyone who liked, shared and showed us some love over the last few weeks, we really appreciate all of the support you have shown us here at Hussey Coding. Don't forget that we still have our FREE project creation and our lifetime Developer subscription discount offers running over at Developerconnection.co.uk which will be automatically applied when you use the service.

Next week I am super excited to bring you an exclusive interview with none other than MMUK'20's organiser and CEO of wearejh.com, Jamie Huskisson so be sure not to miss it!

Until then from all of us here at Hussey Coding, stay safe and have a great day!