Hey everyone and welcome back to another blog by
Hussey Coding

As many of you will know Magento recently released their newest update which is packed full of fixes, improvements, new things added, old things removed, security patches and pretty much everything in between. In this blog we are going to partially cover the release notes for both Open Source and Commerce editions for ... 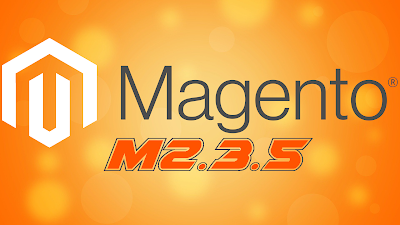 Before we dive into the notes for 2.3.5 there are a few things that need mentioning.
Firstly, release notes were published for both Open Source and Commerce editions separately but apart from a few extra things in the Commerce edition of the notes (features like B2B & Page builder) there isn't that much difference between them so we're going to over both sets of notes here. To avoid confusion, when you see the * symbol, these features will apply to Commerce edition only

Secondly, it's important to note that this was not just the release of M2.3.5, it was also the release of a security only patch for 2.3.4-P.1, allowing you to apply the new patch without having to download and install all the new stuff that comes with the 2.3.5 package as well.

Thirdly, during pre-release, there was an error discovered with the wish list module in both 2.3.4-P.1 and 2.3.5 in all editions of the Magento platform. To fix this Magento released Patches called 2.3.4-P.2 and 2.3.5-P1, both of these patches contain everything the original releases had to offer.

Lastly, everyone is going to need to download and run the updated DB_CLEANUP_SCRIPT_V2, regardless of whether you have previously run DB_CLEANUP_SCRIPT_V1, as soon as possible!
This will correct the issues discovered with V1.
If you are running any Magento edition on or after 2.2.10 or 2.3.3 you just need to run the script, for any edition before 2.2.10 or 2.3.3 you will need to download the patch and then run the script.

Ok, with all of that out of the way it's time to dive into the good stuff!
The release of 2.3.5 boasts over 180 functional fixes, more than 25 security fixes and the resolution of at least 46 GitHub issues by the ever faithful community, which is undoubtedly one of the best there is, including core code clean up and advancements to features like inventory management and GraphQL.

With so much information to cover from these release notes we're going to split the notes up into at least 2 blogs. In this edition of the Hussey Coding blog we are going to take a look at the "Highlights" section of the release notes, these are some of the key features that 2.3.5 has to offer including improvements in core code quality and performance, elevating features such as PayPal, inventory management, Sales and strengthening B2B*, GraphQL and CMS abilities.

First up, Magento would love for us to know that they have made a number (25+) of substantial security enhancements, including but not exclusive to, improvements to halting remote code execution and cross-site scripting, implementation of content security policies and the removal of session_id from the URL. To their credit they state that they have had no confirmed cyber attacks using these first two vulnerabilities however in Magento's opinion, prevention is better than cure, good job Magento!
They also use this opportunity to remind everyone to practice good cyber security, and so do we! If you need some help in this area then check out our series on cyber security HERE.

Next up we have a list of platform upgrades.
Elasticsearch 7.x is now the default search engine for all editions of Magento. If you are still running Elasticsearch 2.x or 5.x then it's time to upgrade to 7.x as these previous versions will now be limited and will be removed completely from 2.4.x. Basically, if you aren't running 7.x just update now as sooner or later you are going to have to anyway.

Unfortunately there is bad news for anyone running third-party payment extensions that are not found at the Magento marketplace as they are no longer supported and will all be removed from the 2.4.0 update. This includes payment methods such as Authorize.Net, eWay, CyberSource and WorldPay.
On the subject of being unsupported, say goodbye to the Signifyd fraud protection code, as above you can access and install a new extension from the Magento Marketplace and it is Z beginning of  Z-END for the Zend framework as Magento begin the move support to the Laminas project. Don't worry if you need some time to get used to the change, this is not a one out, one in kind of deal, there is time to familiarise your self with the new system however you also can't put it off, eventually Zend will be removed and Laminas will be all you know so we recommend that you start to get comfy with it sooner rather than later.
Google shopping ads Channel also is not coming out of this new update alive, the bundled extension has come to it's end of life for both 2.3.5 and 2.3.4-P1 and will no longer be supported so, you guessed it, you will need to find yourself a replacement at the Magento Marketplace.

There is now a new way to invalidate all customer sections data which sidesteps the problem in previous updates with information not simultaneously updating in some areas. This is now solved with this newest performance boost. Another feature to benefit from a boost is the performance of Redis. With a smaller amount of queries from Magento requests, fewer conditions on write ops and an auto priority ability Redis is able to work with even more efficiency than before.

A recent addition to the Magento family is the Page Builder* tool and it too has had some special treatment. With the new template feature you can now basically copy and paste pre-made or even custom pages across your site, you can also add video content to the background of your rows, banners, sliders and you can now adjust their size too, giving you more customisation options, something that Magento is famous for providing!

PWA Studio also comes with new abilities such as aiding developers to build and implement extensibility API's, new and improved caching logic, better data fetching and shopping cart components. New to PWA? Don't worry we have you covered, take a look at our recent series all about PWA HERE.

Brining our time in the "Highlights" section to a close is new kid on the block Product recommendations*. Utalising the power of Adobe Sensei, AI and ML Product recommendations scrutinizes customer journey data from start to finish and creates a tailored customer experience encouraging brand loyalty, increase in revenue, returning custom and a raise in conversions.

As usual with advancement there can often be issues with backwards compatibility and 2.3.5 is no exception to this issue, but you can read about these minor issues and the whole "Highlights" list here.

Thank you for joining us today for a longer than usual post, but as we said at the beginning, there is so much to unpack from these release notes that trying to cover it in one post would be insane! Do go and check out the release notes and remember if you need any help with this update or any other Magento project, DeveloperConnection.co.uk has your covered, the UK's newest Magetno project marketplace is still open and available to you now!

Thank you again and remember, esspecially in this time of uncertenty, stay safe and have a great day!