PWA, what does it cost?

Hello all and welcome back to another blog by
Hussey Coding

Today we're going to be continuing our series looking at PWA. So far we've looked at speed, interaction and reliability, and seen that for the most part, PWA seems to be ruling the roost. But what about the price tag?

In today's blog, we ask the question ... 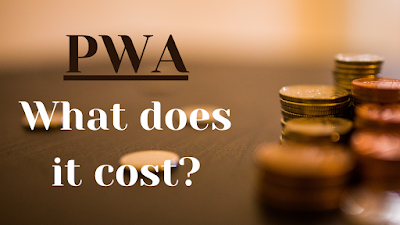 First of all, we need to take into consideration that Magento seems to be a step behind when it comes to the world of PWA, the buzz around PWA has been building for quite some time now, and there are some apps like Twitter lite for example that have been running as PWA's since 2017.

Why does that matter? Well since the technology is new to the Magento community that's going to take time for everyone to catch up. Developers will take longer to create a PWA now in comparison to this time next year. By then they will all probably be familiar with how they work and can design them much quicker, so if time is money, then the more time it takes, the more money you pay.

Now just because Magento is late to the party, it doesn't mean that the folks over at Adobe are just resting back wishing they were first in line, on the contrary, in 2018 they released Magento PWA studio, a set of tools designed to help developers quickly learn new methods and develop old ones in order to create a PWA site, click the link to find out more (PWA Studio).

Another benefit of PWA is that overall they are cheaper to produce compared to the native app. Traditionally if you wanted to expand to mobile, you'd need to have both a website and a native app, employing developers for both projects. However, if you want your app available on both iOS and Android app stores, they would count as two separate projects and require two teams of developers to complete. Then you would need to submit your app for review and acceptance, needing to change things as you went depending on the feedback of the app stores.
With PWA that all changes! You just need the one team, this will automatically cut the cost dramatically as you will need fewer developers/programmers to do the work. On top of that, since you would not be submitting your PWA to the devices app store, you also won't need to go through the hassle of trying to get it approved, once it's done you can just go live with it.

But what about the numbers? Sadly we've not been able to find a definitive starting price. What I can tell you is that after some online fishing (the OK kind not the cybercrime kind) the lowest estimate is about £2,300 climbing to anywhere between £700,000 and £800,000. It's worth noting, however, that the higher end numbers are assuming that you would need to create a PWA from scratch, and the lower numbers are assuming that you have something to work with already or using a tool such as PWA studio.

The reality is that it's all subjective, is it cheaper to create a PWA rather than a native app? Yes, yes it is, however, that doesn't mean that PWA is cheap! To some of you looking at these figures, you're thinking "I could never afford that!" To others, you may be thinking " Yeah, that's doable for our company." What's important to remember here is that PWA is still new, there are still things to learn. The best way to find out if you can afford to jump on the PWA train is to connect with developers and talk through your companies needs.

Speaking of connecting with developers, the new Magento project marketplace Developerconnection.co.uk is full of store owners needing projects completed and skilled developers waiting to meet those needs. It's a great place to connect and build long-lasting, professional relationships. The easy to use, detailed project creation form guarantees that any store owner will be matched to the most qualified developer or team for their projects needs and, in keeping with today's blog's theme, I'd do well to remind you that Developer Connection takes 0% commission or cut at all from any work done, clients and developers are free to connect and contact each other outside of the service and all costs are clearly posted on the website for all to see. Follow this link now to see how Developer Connection compares to other sites such as UpWork, TopTal, Commerce Hero and more - HOW WE COMPARE.

Thank you for letting us be a part of your day today! We hope you've found this blog useful, feel free to leave your comments below or hop on over to our various social media profiles, listed below, to join in the conversation.
Until then, stay safe and have a great day.